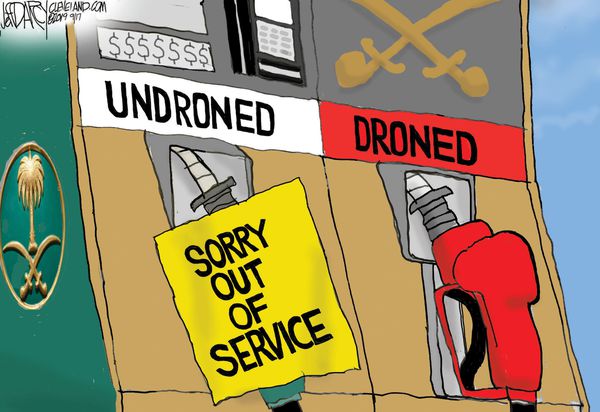 Iran was the staging ground for the weekend attacks on the massive Saudi Arabia oil field, according to US intelligence that was shared with the kingdom, a report said.

One of the three US officials expressed confidence that Saudi Arabia's collection of materials following the attacks would yield "compelling forensic evidence. that will point to where this attack came from". "We want to find definitively who did this", Trump said.

Officials at Saudi state-owned oil company Saudi Aramco said they face a "severe" disruption that could last for weeks and have been contacting customers to inform them that October shipments will be delayed, Bloomberg reported.

Saudi authorities were also bullish on plans for the mega stock listing of oil giant Aramco, which was thought to be imperilled by the attack.

The U.S. administration has pursued a "maximum pressure" campaign against Iran that seeks to force it to abandon its nuclear program and make other changes.

A senior USA official told reporters that evidence from the attack, which hit the world's biggest oil-processing facility, indicated Iran was behind it. Iran has denied this.

The sharp division in blame has placed some of the strongest USA allies in the precarious position of determining how to respond to such provocative action.

The officials did not provide evidence or detail the U.S. intelligence they used to make the assessments.

Iran's clerical rulers openly support the Houthis, who are fighting a Saudi-led coalition in Yemen, but Tehran denies that it actively supports the Yemeni group with military and financial support.

Many other countries have also avoided choosing sides on the latest incident, which disrupted the same global oil market to which the US has been attempting to sever Iran's ties via sanctions. On Monday, the president said the US will await a full review of what happened.

Iranian-allied Houthi rebels in Yemen, which Saudi Arabia are at war with, claimed responsibility, saying drones were launched in the attack.

He said the U.S. was still investigating if Iran was behind the attacks, but added that "it's certainly looking that way at this moment".

Whether or not the Iran-aligned group carried out Saturday's crippling raid on a Saudi oil plant - as it asserts - its capabilities mean it can feasibly claim responsibility for the strike, a humiliating blow against its top adversary.

On Tuesday, global crude prices slid 5% on anticipation of early restoration of lost supplies, but the market remained wary as reports suggested that Saudi Aramco has warned four large consumers, including PetroChina, of shipment delays.

Saturday's attacks raised the prospect of a major supply shock in a market that in recent months has focused on demand concerns due to the pressure on global growth from an ongoing United States-China trade dispute.

The JCPOA, or Joint Comprehensive Plan of Action, is most commonly known as the Iran nuclear deal.

"If Tehran was indeed behind the attack, it is trying to impose a cost on the USA and its allies for inflicting maximum harm on the Iranian economy", he said.